This article is the first one of a series dedicated to Aircrafts Small Volumes Decompression.

NOTE: This article and the following may use indefferently the terms like small volume, closed compartments, cabin monument compartments. All those terms are equivalent and refer to a small enclosed volume subjected to differential pressure with its surrounding environment.

In case of cabin modification, installed bulkheads, floor structure and partitions in pressurised compartments must be designed to withstand maximum differential pressure generated during the most critical decompression event, as specified in CS25.365(e).

Additionally any enclosed Cabinet (also called Small volume, closed compartment, cabin monument compartment) should be built such as none of its constitutive part will become detached and could potentially injured occupants while in their seats in case of maximum differential pressure, as specified in CS25.365(g).

For instance, imagine a fully sealed box installed inside the Main Cabin of an aircraft. Before any aircraft depressurization problem occurs, the sealed box and the Aircraft Main Cabin have the same internal pressure — let’s call it \(P_c\).

Now, if for any reason an opening hole appears in the Main Cabin fuselage, the Cabin Air will be sucked out the aircraft. After a short time, the pressure inside the Aircraft will drop down to the external ambient pressure — let’s call it \(P_a\).

If the box was perfectly sealed, the pressure difference between the box and the Aircraft cabin will start to increase from the initial moment (when box and aircraft had same pressure) until it achieves the maximum differential pressure of \(P_c\) - \(P_a\) (when box pressure is \(P_c\) and Aircraft pressure is \(P_a\)).

In other words, this hypothetical fully sealed box would have to sustain the Maximum Aircraft Differential Pressure (\(P_c\) - \(P_a\)) in case of opening in the aircraft fuselage (depressurization of the aircraft).

In case of an opening in the fuselage and consequently depressurization of the cabin, the differential pressure sustained by the Cabinet/Compartment (Small Volume Decompression) would depend of several factors related to the Aircraft type on one side (flight altitude, hole size, Main Cabin/Room Volume, etc) and the Cabinet/Compartment itself on the other side (Cabinet Volume, Vent Area between it and the room where it is installed, cabinet stiffness, etc).

The aircraft manufacturers (OEM) usually provide guidance regarding the pressure load cabinets/compartments should withstand in case of an explosive decompression. Those guidances documents are:

This load is usually based on the cabinet volume and its vent area for a cabinet installed in a standard PAX configuration (see figure below). 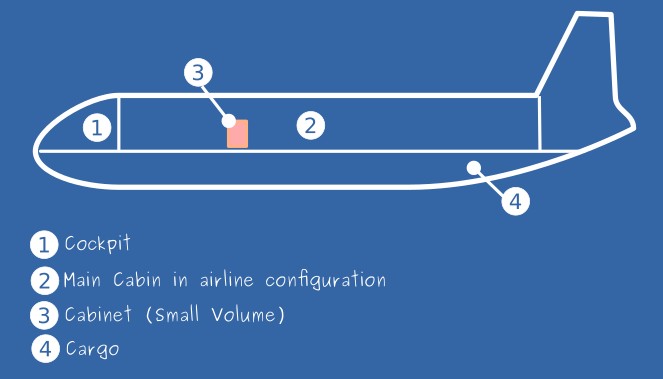 In case of aircraft interior refurbishment (airline modification or VIP outfitting), the Aircraft Main Cabin is frequently divided in smaller rooms (Volumes), see example in the figure below. 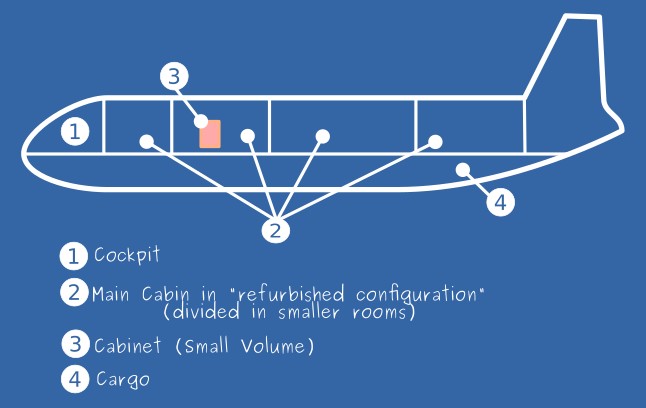 In case of aircraft interior modification, Esonix is an easier and efficient tool to determine accurate Decompression sustained by Small Volumes (Cabinets/Compartments) enclosed in resized rooms.

In the next Article we will investigate the influence of aircraft configurations on the pressure sustained by the Cabinets/Compartments (Small Volume Decompression).